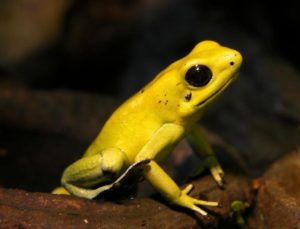 A 24 step (!) synthesis yielded two milligrams of batrachotoxin, or two frogs’ worth. If it can be scaled up, then collection in the wild will become irrelevant. But the synthesis also revealed some interesting biology. That’s because, like many chemical syntheses, the protocol generated not only batrachotoxin, (-)-BTX, but also its evil twin, (+)-BTX.

Many carbon-based molecules—i.e. most biologically relevant molecules—have a handedness, determined by the way the various other atoms they contain are arranged around the carbon. Molecules can have the same constituent atoms but be mirror images of each other, just like your right and left hands. They are the same but are not superimposable one atop the other. This seemingly small difference matters. All life on Earth, for some as yet undiscovered evolutionary reason, uses exclusively left-handed amino acids to make proteins and right-handed nucleic acids for their genetic material.

I wouldn’t exactly call the result “anti toxic,” but I learned something about chemistry from this article… (I’m pretty sure I learned about the mechanics of the neurotoxin in a neuroscience class.)